Home » Inspired by a Vintage Fan

Have you ever seen a picture that you loved, even if you didn’t know why?  I came across this picture when writing a previous blog post about retro kitchen appliances. 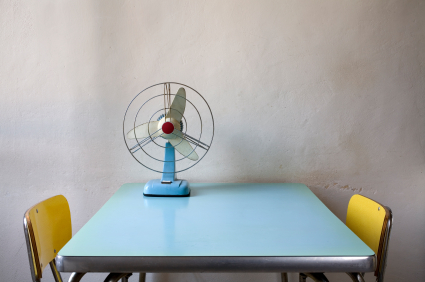 Then one day, while driving errands, I saw this fan outside a junk shop: 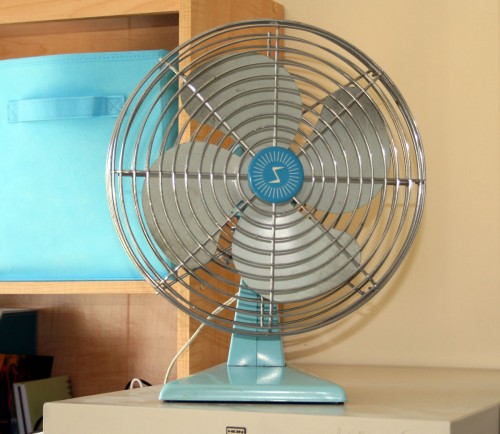 I pulled over, told the kids not to touch anything breakable, and bought the fan from a rather grumpy guy for $18.  Not a great deal, I’m sure.  But well worth it to me simply because I liked it. I like the color, the deco styling, and hey…it even works!

I became curious about this little fan.  So I did a bit of digging, and found that it came from a company called Superior Electric Products Corporation.  They were best known for their brand “Superlectric.”  Not a high-end brand.  They sold a lot of box fans through Sears in their day.

The company was founded in 1922 by a man named Edmund Lawrence Haas.  He moved the company to Cape Girardeau in 1938 due to labor troubles.  In 1946, Haas sold the company to his son-in-law so he could retire.  The son-in-law ran the company until his retirement in 1968 when he sold it to United Industry Syndicate of New York.  It ran until 1982.

So, I figure this fan is circa 1960’s.  I know it was before 1968 by the sticker on the bottom, but not much before because wires on the screen are closer together than some of the older fans (less of a finger-slicer!).  So it looks like my fan and I are of similar vintage. lol

Here it is in my office.  Even though the weather has turned cool and I don’t really need to run a fan, I keep it there because, quite frankly, it makes me smile. 🙂 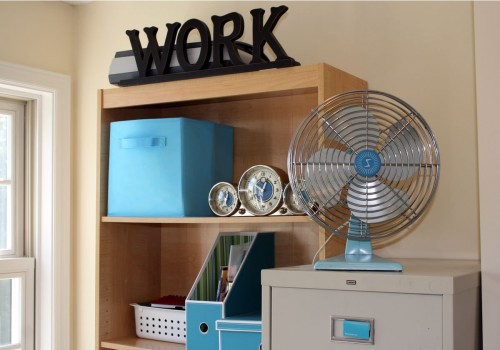 Hmmmm, now that I think about it…that file cabinet is rather vintage as well.  Maybe I’ll spice it up with some bold spray paint.  What do you think?

Where do you find inspiration?