Home » The Castle on Talcott Mountain

What started as a simple hike up Talcott Mountain in Simsbury, Connecticut turned into a fascinating story about a family named Heublein. Not only is it a beautiful hike, it’s a beautiful love story. 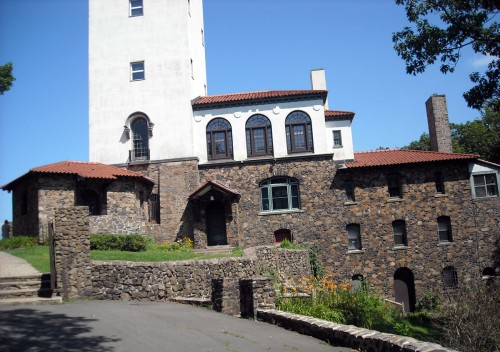 (Now if you’re just interested in the pictures, skip ahead.)

In the mid 1850’s, the Heublein family moved to the United States to escape political unrest.  They settled in Hartford, CT and ran a successful hotel and restaurant and imported/exported food and liquor.

At age 25, Gilbert F. Heublein was engaged to Louise M. Gundlach, the daughter of a prominent Hartford German-American businessman.  Apparently they frequently hiked Talcott Mountain, and one day he promised to build her a castle there.

So they married, had two kids and apparently did very well for themselves. So in 1914, Gilbert built Louise her castle – the Hueblein Tower.  It’s a six story, 165 foot tower of concrete faced with white stucco built on a frame of 12-inch steel girders anchored into the bedrock of the mountain. It was modeled on towers that existed in Germany near Gilbert’s birthplace.

At the top of the tower was an observatory of windows providing a panoramic view at 1,000 feet above sea level. The tower was topped off by a cupola.

Gilbert and Louise used the tower as a summer home and for entertaining.  All was well, until the start of World War I.  Anti-German sentiment was prevalent, and rumors circulated that the tower was being used to send spy messages to German ships.

Gilbert combated the rumors by strategically offering the use of his tower to the state or Federal Government.  They never took him up on it, but it did stop the rumors.  Gilbert enjoyed the tower until his death at age 88 in 1937.

For the next 6 years, the tower was not used. In fact, it racked up $70,000 in back taxes, which resulted in the tower being sold to The Hartford Times.  It became a place for parties and prominent meetings of all sorts, including Ronald Reagan (then a Hollywood actor), Frank Lloyd Write, General Omar Bradley, and opera singer James Melton.

Perhaps the most prominent guest was Dwight D. Eisenhower.  It is believed that he was in town for the opening of a new terminal at the Bradley Airport and attended a party at the tower.  While visiting, he made the decision to run for president.  I believe they named a leather chair after him.

The tower was then sold in 1962 to a corporation who wanted to build condos and restaurants on the mountain.  That was quickly kiboshed by residents and in 1966 it became a state park.  Unfortunately, it wasn’t until the mid-1980’s that funds were raised to begin restoration of the tower, and much of the furnishings were destroyed due to vandalism.

So here’s the tour…first the outside. This is the tower portion of the castle.  Notice the Bavarian elements of Southern Germany. 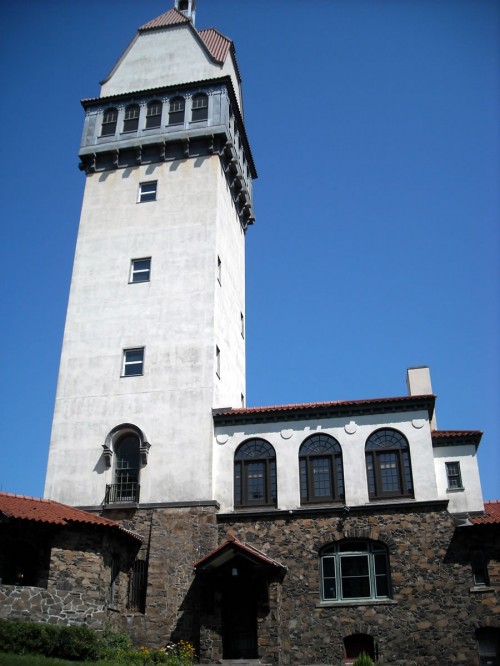 And here’s the view from the top…(if you look closely, you can see downtown Hartford in the top-right) 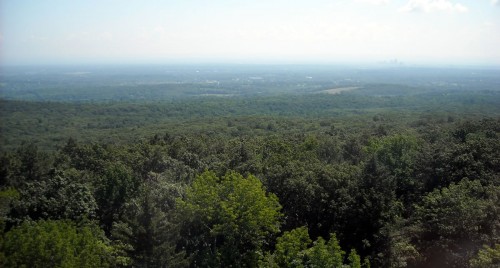 Here’s the view from the front door (can you imagine!) 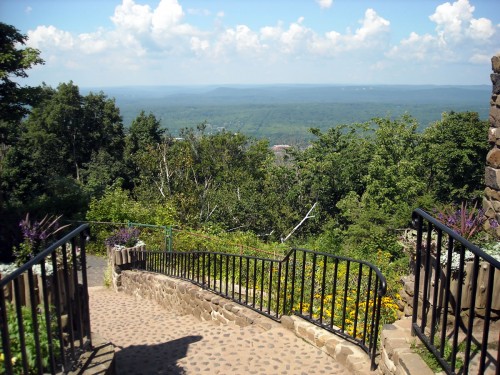 Now let’s move inside. The furnishings were more casual and playful for that period, perhaps because it was used as a summer home and for entertaining.

The family room is very casual and full of German antiques and European revival pieces. 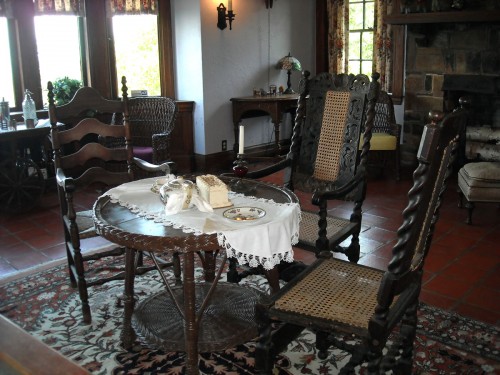 Here’s another view – don’t you just love the juxtaposition of the deer head and gnomes? 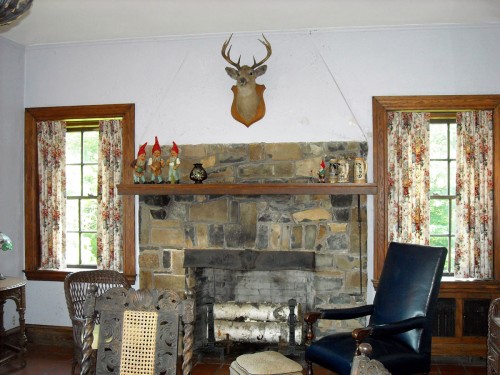 I loved this sunny sitting room on the second floor. I could easily curl up there with a lap top and read my favorite blogs! 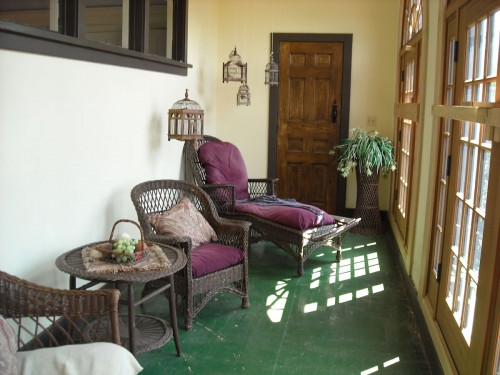 This was one of the children’s bedrooms: 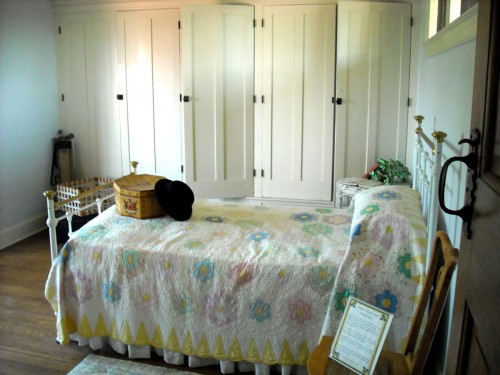 Check out the beautiful window! 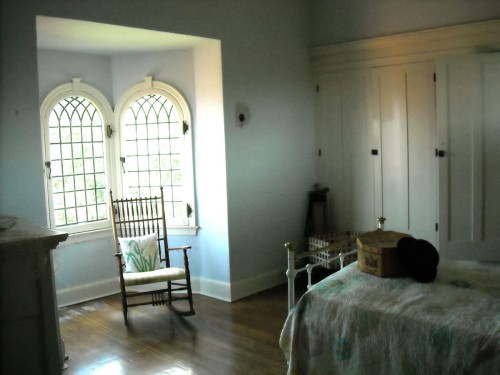 Here’s the outside view of the window – love it… 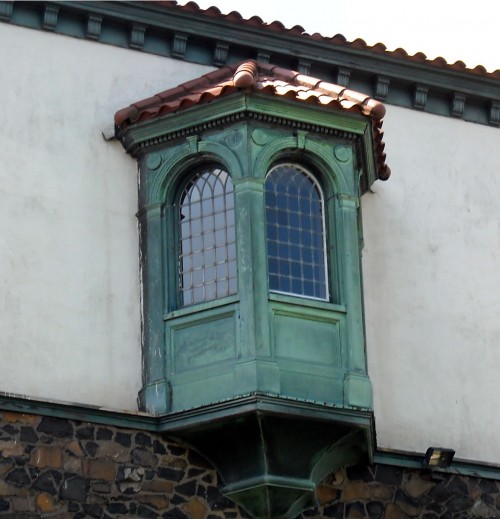 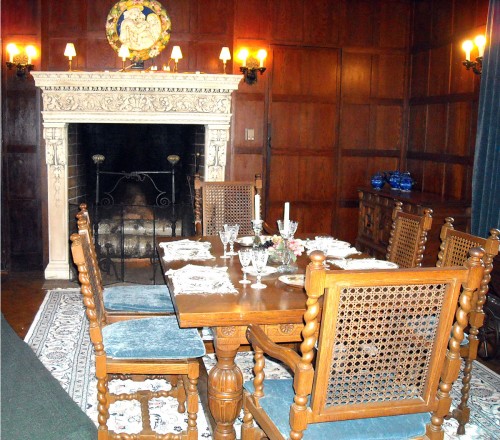 Check out the beamed ceiling 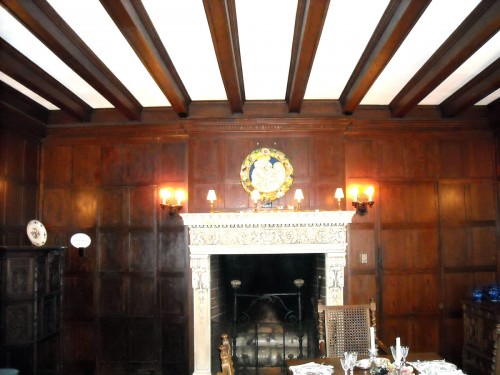 And what castle tour would be complete without the royal gift shop! 😉 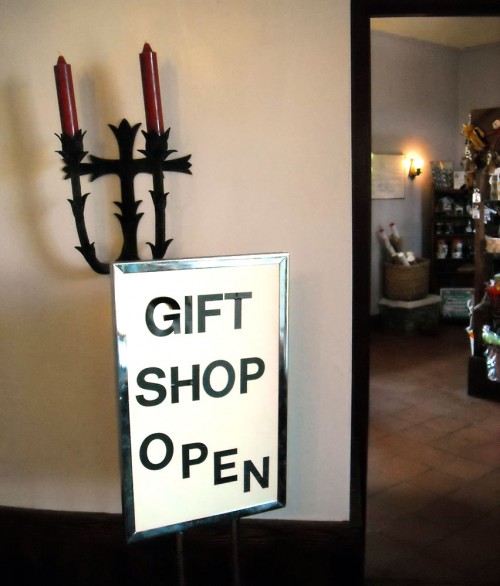 There you go…I just saved you a two mile walk up a mountain!

So could you live in a place like this?

« Art on the Pier at P-Town
Sliding Barn Doors: Beyond the Farm »