If you have any old windows hanging around (pun intended) why not put them to use in a creative way? Great way to upcycle an old window to a higher form! Thanks to guest blogger Jennifer for this great idea!

Windows, windows and more windows; that’s the mantra of any home designer who wants to create openness and space within a space. But we often think of windows in the context of the house itself and rarely in the outdoors or outward facing aspects of the home. We also don’t think of windows as ornamental items that we can juxtapose in almost any area of the home without having to knock down some walls in the process. So without further ado, let’s jump right into what you really want to see, hanging windows! 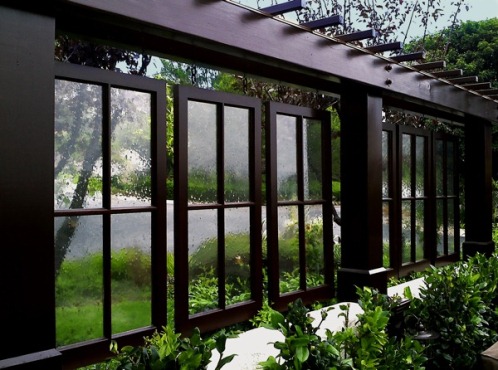 This exciting and eccentric design comes courtesy of designer Claudia Schmutzler who came up with this concept in more of an accidental manner than as a deliberate work of art. According to her, she had some leftover windows after doing some home improvements and having built out a deck later, opted to just hang the windows up and make some use of them.

To her surprise, people really loved the idea. This is an especially great concept when thinking of ways to either build out your new deck or breathe some life into your existing one. The best thing about this concept is that it does not have to be as elaborate as what is in the picture. Putting up some simple structures and hanging up the windows should do. 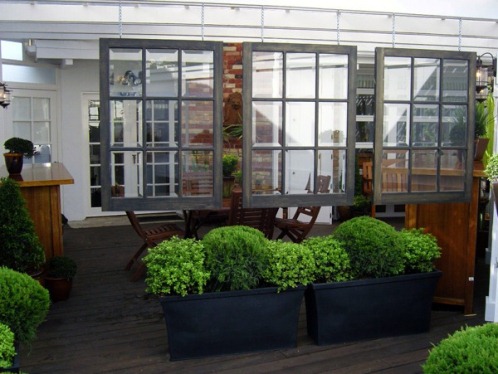 A slight modification on Claudia’s design concept, here we see the designer using a very simple hanging window format to create a closed space out of what was previously open. Typically, you would find the homeowner building out an elaborate patio that ends up turning the outdoor space into just another room in the house. But here we see that the hanging windows actually break the space but without closing it out completely. A brilliant implementation of hanging windows. 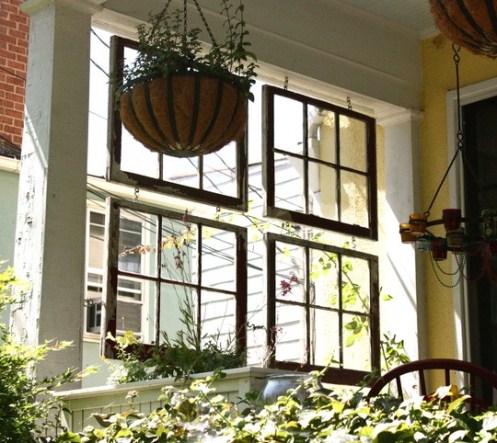 Offering an entirely different concept to the hanging windows concept is this design that works excellently for a porch design. Think about how porches tend to be neglected when it comes to creating beautiful spaces in the home. This design turns that round and creates a nice focal point on the porch. Using windows of identical size and shape give it a perfect-symmetry feel to it and make the porch seem immediately private and classy when you come up the porch. 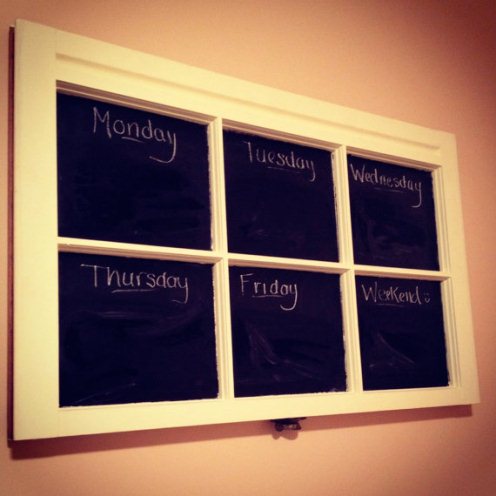 You probably did not expect to see this here, especially after seeing see-through windows hang up. Well, this is another beautiful use of the hanging window concept, going to show that you don’t have to be bound by just one way of doing it. Here we see a window and blackboard mash-up that doubles up as a notice board and an art piece. The fact that the window has separate spaces makes the hanging seem more artistic than utilitarian. Think of how it would look at night with nothing written on the blackboard, you would probably find yourself peering into the “dark night outside”. 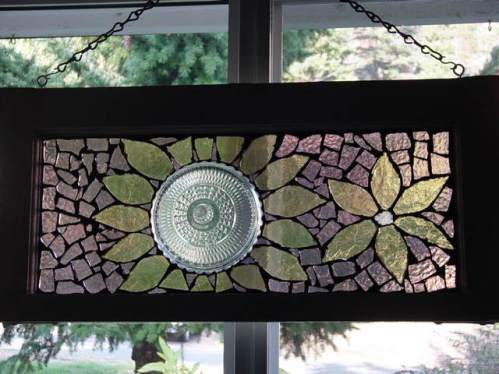 Jennifer Taylor is a home improvement consultant passionate about discovering the intersection between beauty and utility in home improvements. Find more of her writing at SEQ Glass Australia.